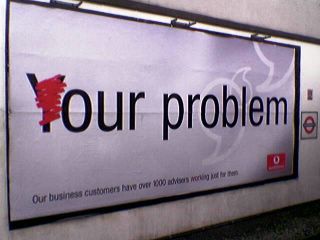 I saw this advert for Voodoofone business services on Saturday, in Hammersmith tube station, while waiting for a Piccadilly line train. I found it quite amusing on the grounds that my company is moving away from Vodafone for our mobile services because the contract we have with them is not competitive and they don't seem interested in making it so. For instance: for GPRS services, we pay 6 times the amount a friend of a mine on a personal contract pays. I can understand the concept of having special business services that are more expensive than private ones. But 6 times, for a service that's not better? We don't get free phone upgrades either, we have to buy the new phones. And it goes on and on. I perfectly understand that we took this contract on a few years ago, at a time when GPRS phones were a rarity and type of services you'd offer were different than what you'd offer now and at a different rate. But Vodafone, as far as I know, have never made any pro-active effort to adapt our contract to their new tariffs and services nor are they making any effort now that we are in the process of cancelling it.

So, it seems to me that Vodafone is very busy getting competitive services out in a bid to win new customers but are neglecting their existing ones. Someone should teach them the rule of 10's: it is 10 times easier to keep an existing customer than it is to win a new one; it is 10 times easier to win a new customer than it is to get back a former one who left because he was disappointed.

Gone are the days when Vodafone was the new kid on the block, taking on the established state provider, BT Cellnet, that was so slow to move that it nearly disappeared and had to re-invent itself as O2. Vodafone is now the largest mobile services company in the world and it shows: they are slow and uninspiring. The new kids on the block are called T-Mobile or 3 and they are hungry. Vodafone customers must look tasty to them and ripe for the picking.