Most modern Linux desktop distributions now include D-Bus. It enables different applications in the same user session to communicate with each other or with system services. So I thought I'd experiment with D-Bus using Vala and starting with the published example.

I started with a simple ping client and server based on the example above, the main difference being that I added a loop in the client. The server code takes a message and an integer, prints out the message and the received integer, then adds one to the integer before returning the result:

And the client simply queries the server in a loop every second and prints out the input and output values:

Start the server followed by the client in two separate terminal windows and you should see them exchange data.

The problem with the code above is that if the server process terminates while the client is still running, an exception occurs and the client doesn't recover. It would be nice if we could get the client to terminate gracefully when the server stops. The Vala GDBus library provides the ability to detect when a service comes up or is brought down using watches. When you setup a watch, you need a callback method for the watch to call. That callback method needs to be called on a different thread than the main client thread. This is handled by the MainLoop class but it means that the core client loop needs to be run in its own thread, which complicates the client code a bit. In the code below, the client code has been encapsulated into a Demo class and the client loop thread is controlled using a simple boolean attribute.

The server code is unchanged.

With this version, once the server and client are started, stopping the server through CTRL-C will notify the client which will then stop gracefully. You can even have multiple clients, they will all stop in the same way. The advantage of doing this is that the client has a chance to clean up any resource it holds before stopping.

All of the above is great and we can now design client programs that share a common service. But when dealing with software that is started by the user, the client/server model is not always the best option: you need to ensure that the server is started before any client is and that it is only stopped after the last client has stopped. And what happens is the server fails? What would be really nice is if we could have peers: no difference between client and server, just a single executable that can be run multiple times, the first process to start acts as a server for the other ones and when it stops responsibility for the service is taken over by one of the other processes if any are still running. The last process to terminate closes the service. D-Bus makes it easy to implement for the following reasons:

Therefore, the implementation of the peer program is simple:

We only need a single Vala file to implement the peer:

Start several peers in different terminal windows, at least 3 or 4. You will notice that the first process starts a server thread that all client threads connect to. When the process that provides the service terminates, the next process in the chain takes over the responsibility for the service. And finally, when the last process terminates, the service is closed.

Note that if you want to check D-Bus activity while running the programs in this introduction, you can either install the D-Feet tool or run dbus-monitor from the command line.

The Devil's in the Details

A good piece of software should make boring, repetitive and error prone tasks easy. One of them that photographers face regularly is resizing a batch of images. The typical situation is the day after a party when everybody wants a copy of the photos you took, either by email or on a CD. Quite often, people don't want the full size but they'd quite like copies of all the photos. I found myself in such a situation on New Year's Day: 150-odd photos that needed resizing and burning to a CD. Luckily, I had my trusty Ubuntu laptop running Shotwell. Shotwell does exactly the right thing when you want to export photos: it allows you to resize them all to a size that you specify, as shown in the dialog below: 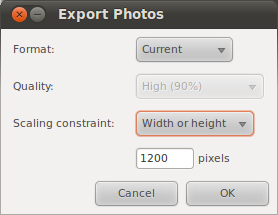 My laptop took a few minutes to resize all 150 photos when I exported them. Next to me was a friend who uses a proprietary operating system that shall remain nameless and who commented: Wow, that's cool! When I do that, I have to resize each photo manually and it takes ages! Sometimes the best features are the simple ones.