Making Skype work with PulseAudio in Ubuntu Intrepid and Jaunty

Following my sound issues with Skype on Ubuntu, I did a bit more research and eventually found an excellent how-to article on PulseAudio in the Ubuntu forums. Appendix C explains how to get Skype to work properly and indeed it is a doodle and means there is no need to kill PulseAudio when using Skype! I've tested it in Intrepid and Jaunty and it works a treat. To quote the article, here's how to do it:

Open Skype's Options, then go to Sound Devices. You need to set "Sound Out" and "Ringing" to the "pulse" device, and set "Sound In" to the hardware definition of your microphone. For example, my laptop's microphone is defined as "plughw:I82801DBICH4,0". 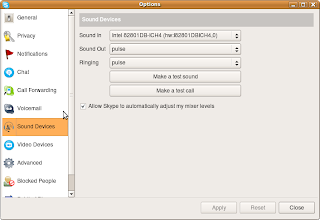 Like a number of people, I was a bit dubious about Google Street View. If you want to see what a place looks like, there are enough photographs on the web for you to find, why would you want to go look at bad photographs taken by a passing car? However, where Street View does come into its own is when coupled with driving directions in Google Maps: for each intersection, you can have a picture of what it looks like with an arrow that tells you where to go. This is a fantastic visual aid when going to a place you are not familiar with. 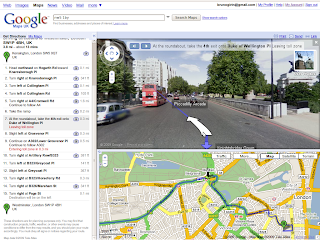 Adding a Static Address to the DHCP Server

I've got a Lexmark X9575 all-in-one printer. Up to now, it was connected to the Mac via USB. I wanted to reconfigure it to connect it to the network instead so that I can use it with other computers. But I wanted to do so in such a way that it would get its network configuration via DHCP while keeping a fixed address and be resolvable via DNS.

The first thing I did was to remove the printer setup from the Mac (no, you can't change the configuration, you have to un-install and re-install, thank you Lexmark!). Then I connected the printer to the network switch with a standard RJ45 cable. It requested a DHCP lease form the server immediately and the DNS entries got updated. That was a good start. However, the IP address was part of the dynamic range and therefore unpredictable and the name of the printer was hard-coded to the very non-intuitive ET0020002C5B7A. I wanted something more memorable like lexmark-printer.

To force a fixed IP address is quite simple, as explained in this DHCP mini-howto. I just added the following to the /etc/dhcp3/dhcpd.conf file:

And it didn't work, for two reasons:

To solve the first problem, I needed to force the expiry of the lease on the DHCP server. The ISC DHCP server stores leases between restarts in a file called /var/lib/dhcp3/dhcpd.leases. So revoking the lease can be done by updating that file, removing the entry for the given lease and restarting the DHCP server.

The second problem was of the same ilk: go to the printer's TCP/IP configuration, set DHCP to no, save the settings, go back into them, set DHCP back to yes and that forced the printer to request a new lease.

That gave me a static address for the printer while still keeping it managed by DHCP. However, in such a case, the DHCP server doesn't update the DNS database. This has to be done manually, by adding the following in the forward lookup file:

And this in the reverse lookup file:

Then of course, a restart of the DNS server is required: