I've been slightly under the weather since the middle of last week. As a result, I went to the Victoria Medicentre on Saturday, as my local surgery is not open on Saturday, in an attempt to sort it out. The condition consisted of spots on the face combined with a sore throat and light flu like symptoms. I was given a cream for the face and had to insist to get anything for the other symptoms. The doctor there eventually gave me some antibiotics in case it gets worse when I mentioned that I was supposed to fly to Atlanta on Monday. I wasn't very impressed but went home with my stuff.

On Sunday night, it did get worse. In fact, I've never felt anything like it before. I was about to pack my suitcase to go to Atlanta when I suddenly felt myself shivering even though the heating was full on. And I couldn't stop. I eventually checked my body temperature: 39 Celsius, 2 degrees above normal. That would explain it then! So I reckon my temperature suddenly shot up in a space of 10 minutes. I went to bed that night with some paracetamol to make the temperature drop and having started the course of antibiotics that I had been given.

The following morning, that is the morning I was supposed to fly out to Atlanta, I was only marginally better so I decided not to fly. I called the people I had to call in the office telling them I was ill and then tried to see my doctor. Unfortunately, I couldn't see her that day so had to wait until today. So I went to my doctor today who, when she saw what I had been given at the Medicentre said I am not impressed. I got a new prescription and went to Boots to get the medicine.

It all sounds simple except that what I have is extremely annoying because it means that my whole mouth is painful. As a result, I can't manage solid food very well. I can manage liquid and soggy but not solid. Yogurt is great so I got a selection from my local Sainsbury's and discovered Rachel's Organic. I now have a new favourite fruit yogurt brand.

But then surviving on yogurt is a bit boring and not the most balanced diet ever. So I decided to pull out one of my mum's favourite, a classic French desert: compote. There is nothing easier to do than that: it is just stewed fruit. You can eat it warm or cold, it is healthy and qualifies as nearly liquid food. 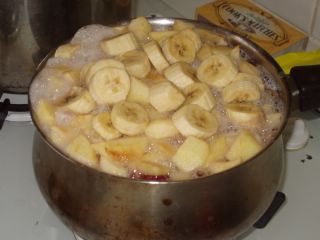 And the best thing about it, it's a very good way to use fruits that are slightly too ripe for eating so you can make it from reduced price items and it can come out quite cheap. All the art is in choosing the fruit. The typical compote is made from apples because it has just the right balance of fibres and water to cook nicely and also has the right amount of sugar to taste sweet but not sickly. A good complement to apples is pears and bananas. Don't overdo the bananas though because they don't have enough liquid to stew well. You can also add berries, such as strawberries of raspberries, but because they have a very strong taste you don't need many of them.

Once, you've got the fruit, find an adequately large saucepan. Peel and cut the fruit in small cubes and fill the saucepan with them. Don't hesitate to slightly overfill as it will reduce later. The smaller the cubes, the quicker it cooks. In my largest saucepan went 4 apples, 4 pears, 4 bananas and a small box of raspberries. Pour water on top, to the top of the saucepan or the top of the fruit, whichever comes first. Put on the most gentle fire you have: the smallest hob at the lowest setting. And let it simmer until all the fruit cubes have melted into a sort of fruit paste. It can take a few hours if you have a large saucepan but don't try to speed it up. You might have to stir it at the end to avoid it sticking to the bottom of the pan but otherwise that's it. You can eat it warm, cold, on its own, with yogurt, on a piece of bread like light jam. It's all fruit and a little water, no added sugar, no nothing.

Hey, you have a great blog here! I'm definitely going to bookmark you!

I have a Health blog. It pretty much covers Dieting Health Fitness Exercise related stuff.

Come and check it out if you get time