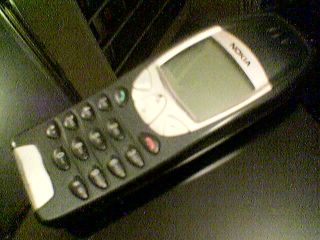 I have a new phone. Not the one in the picture, that's the old one. It got replaced on Friday by a brand new Nokia 6230. It's not the latest model, in fact, it's been around for a while but it is a serious improvement on the old 6210 and it has all the features I need: tri-band, Bluetooth and GPRS. Of course, as no phone can come without a camera theses days, it has one. So I'll surely be taking shots on the go now. It is also a quarter smaller than the 6210, which is good. However, after 2 days of usage, I noticed it comes with the most annoying Nokia feature: when the phone rings and you have keys locked, if you accidentally press a random key that is neither accept call or reject call, it tells you nicely that you have to press unlock and * to unlock the phone and rejects the call. I tried to enable the anykey answer feature to no avail. The result is that when it rings and I need to fish it out of my pocket, it lose the call more often than not because I accidentally press a key. Then the ring tones that are shipped by default with this phone are all boring or annoying so I've stayed with the default Nokia one for now. Where did the old Persuasion ring tone go? And lastly, mine has one dead pixel. Fair enough, it's only one pixel on the whole screen and that could be understandable after heavy usage but this phone is brand new.

Having said that, it is a definitive improvement over the previous one and I'll be able to test drive it over the next few weeks, especially the tri-band feature as I am going to the US for work.