I recently invested in some new gear for my SLR camera so the obvious thing to do was to try it out.

First, there is the new telephoto lens I bought in the USA recently, which prompted HSBC Fraud Detection Department to give me a call. This is a lens that is ideal for wildlife. Luckily, I have the ideal place not far from home, Richmond Park, an old royal park that still has a large population of deer. 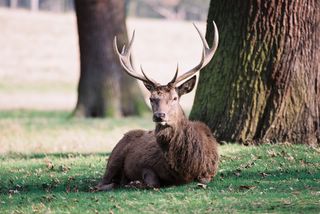 On arrival at Richmond Park, I found a group of red deer in the shade. I came close but not too much and started shooting. I did most shots with the zoom fully extended to 400mm so as to fill the frame with the animals. Even in the shade, the lens focused extremely fast and very accurately. The resulting photos are crisp and sharp, better that what I would have managed with the old lens.

I then found a large group of fallow deer grazing in the sun. As they are so used to humans, if you keep still, you can get within very close range. I had one grazing about 5 metres away at one point. Then part of the group decided to make a runner and I thought it'd be the ideal situation to try out the continuous shooting mode of my camera, as I had never had a lens that focused quick enough to use it before. However, when I got the photos back, I realised the first one was in focus but not the other ones. Then reading the manual, I realised that if I wanted the camera to keep focusing while shooting, I should have also set the focusing mode to AI Servo, as opposed to the default of Focus Once. Doh!

Another piece of kit I bought recently is a ring flash that I found second hand in my local camera shop. A ring flash is meant for macro photography and fits at the end of a macro lens rather than on top of the body. It means that you can light the subject properly even if you are very close, which is the whole point of macro photography. 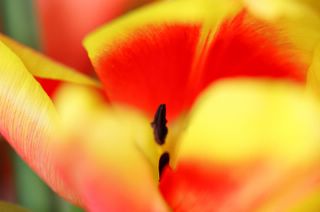 Close-up of a flower

So I decide to go to Kew Gardens. I shot a few pictures there but as it was windy and I didn't have anything to deflect the wind, it very quickly became a chore. I managed a few good shots but decided I had had enough and I'd try with subjects that I could control better. Fortunately, my flatmate had been offered flowers for her birthday so I decided to use them as experimental subjects. I put the vase on the coffee table in living room, the camera on its tripod and started shooting. One thing I discovered about macro is that the depth of field is really small. Well, I sort of new but it's only when doing really close shots that you realise. In fact, it is another reason for having a ring flash because you can then set a very narrow aperture and rely on the flash for producing the light rather than rely on ambient light. Well, that's the theory. I only tried with the flash as complement of ambient light and with a wide aperture. The results are interesting even though it can take time to realise what the picture is about. 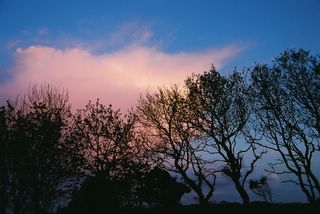 then I went to France for a long week-end, to my home town of Brest, in Brittany. Now, Brittany is famous for its sunsets that can take all the colours of the rainbow and can be very, very dramatic. So when looking out to the garden of my parents' house and seeing the black lines of trees with a bright pink cloud on a dark blue background, I had to take the camera out and take a shot. The resulting picture is very simple, with big splashes of colour.

Since then I have also bought a power booster and a new tripod that is much more sturdy and versatile than my old one. I haven't really tested those yet but I reckon my sister's wedding in 2 weeks time, or the trip to Turkey this week will provide ideal testing ground.

And how does your sister feel about you using her wedding as a 'testing ground' for your new camera equipment?!

I doubt the sister will like it. What if the picture would be very simple with big splashes of white and black colours:))

She didn't mind :-) Mostly because the gear I was trying out during her wedding wasn't essential stuff like lenses or body, it was add-on things. We'll see soon how well I did anyway.