After a long pause, here is the fifth instalment of this series on fractals with Octave. This time I will look at a fractal called the Burning Ship because of its output that looks like a ship going up in flames.

The fractal is a Mandelbrot set that has a generating series defined by:

where the Re and Im are the functions that return the real and imaginary parts of a complex number. The initial condition is:

This fractal can be directly produced with the mandelbrot function we created in previous articles. In addition, we will take r=200 as a divergence limit. 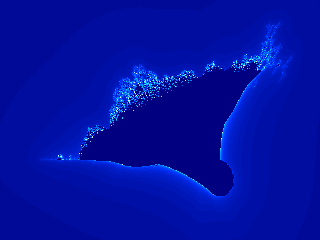 Now let's zoom on this fractal centre left by a factor of 30: 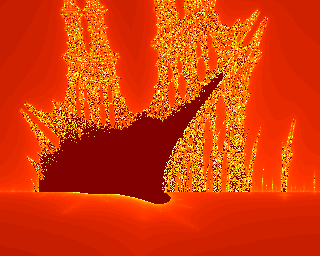 As usual with a fractal like this, the zoomed image looks very similar to the original. Now let's have a look at a related fractal called the Bird of Prey.

In the same way that you can produce interesting variations on the classic Mandelbrot set by changing the power used in the series, we can do the same with the Burning Ship series. So let's increase the power in the series above from 2 to 3:

This cubic series produces a fractal called the Bird of Prey.

You'll note that I chose the boundary values for the complex plane so that I would get a square image centered on the origin. Here is the resulting image: 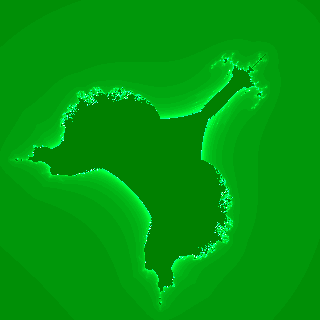 That's it for the Burning Ship. Next in this series, we will look at the original fractal that Gaston Julia was interested in.