I caused mayhem at the Tesco till at Hammersmith tube station the other day. Going through the fruit and veg section, I saw this unusual bright magenta fruit called Dragon Fruit, originating from Viet-Nam. Of course, I had to buy one to try out. The guy at the till was quite nonplussed, having no idea what it was and how much it cost, thus causing major delays until one of his colleagues got him the code for it. Luckily, seeing the fruit, the bewildered face of the cashier and hearing my explanation (I found it colourful and funny so I decided to buy one), the other customers who were waiting behind or going through other tills were rather amused. One of them even asked me several times to confirm what it was so that he could buy one next time round. 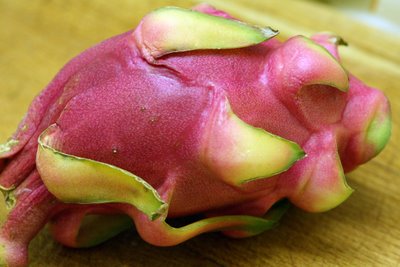 Back home, it was time to taste my hard bought delicacy. I cut it in two, to discover a white centre full of black seeds. 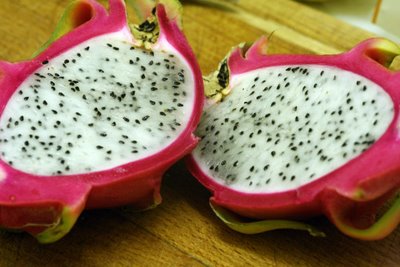 I grabbed a spoon and dug in. The texture is very much like kiwi. The taste is very subtle, virtually non-existent. 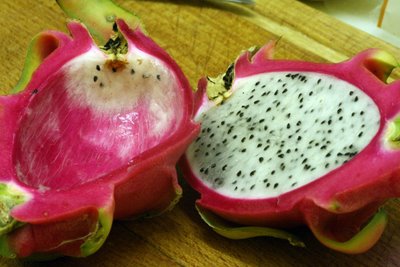 Result: 10/10 for strangeness, colour and potential to cause confusion; 0/10 for taste.

I tried it for the first time in China, and maybe it was just really fresh, but I thought it was awesome. Dragonfruit is one of the more bizarre fruit experiences in our world, to be sure, but I have to say, I love it.