As I have enough camera gear that a standard travel insurance will not cover it, I bought a special insurance just for the camera and associated bits and pieces. They require that I provide serial numbers for every item that is worth more than £200. So when I recently acquired a new EF 15mm f/2.8 Fisheye lens, I decided to add it to the insurance policy and went in search of the serial number. On the box, there is a sticker that specifies a serial number but, at first sight, it looks nothing like any of the codes on the lens itself. To start with, the lens has two codes: a numeric one and an alphanumeric one. Which one is the right one? After some digging on the net, I had the answer, so here's an illustration of it, with a couple of my lenses. 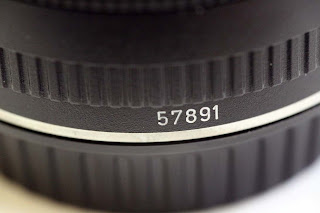 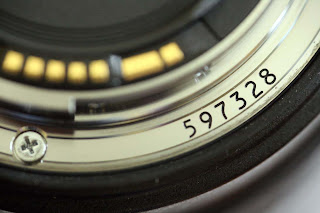 That same number is also available on the box the lens came in. On that box, there is a sticker with a bar code and a couple of numeric codes, with the title Lens No. At first sight, none of the codes on the sticker seem to really match what's on the lens. But looking closer, it appears that the serial number is the end part of the bottom code. It all makes sense now! What the other codes mean, I don't have the faintest idea. 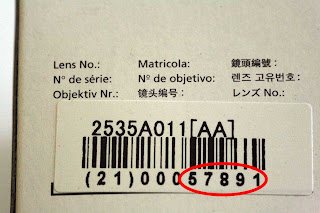 I also found an explanation for the alphanumeric code that can be found on the lens. This is a manufacturing code. My fish-eye lens has a code that says UV0509.

This manufacturing code enables Canon to identify a batch of lenses. For example, the first batches of the EF24-105mm f/4 L IS USM lens had an optical defect that produced serious flares. This code on the lens enabled owners to identify whether their lenses were part of any defective batch so that they could return it to Canon. 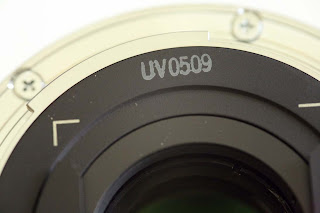 So there you go, that's what all those numbers mean on Canon lenses. I can now fill in my insurance policy properly.