I've had Ubuntu Netbook Remix running on my Asus EeePC 701 for some time. After upgrading my main laptop to the beta 2 of Ubuntu Lucid 10.04, I wanted to do the same to the EeePC so that I could test the new release, report bugs if I found any and generally benefit from the improvements in 10.04.

The first problem I faced was that the EeePC 701 I have only has 4GB of internal storage, which is just enough for Ubuntu but too little to enable me to do a straight upgrade from the previous version (Karmic 9.10). No problem, I thought, I can re-install from scratch as I really have nothing important on that machine.

I created a flash drive image from the UNR CD, as detailed on the Ubuntu web site, booted my EeePC from it and selected to install Ubuntu on the system. However, I then faced another problem related to the limitations of the 701 model: this model has a 7-inch screen with a resolution of 800x480 pixels, which is quite small and the Prepare Disk Space screen doesn't fit in that resolution, making it impossible to install. I duly reported the bug and wondered how I could work around that problem.

Installing from the Alternate CD

One of the great thing with Linux is that you always have a lot of options. Ubuntu in particular also comes with an alternate installer, which is text based and designed to work on very constrained hardware. Exactly what I needed!

I downloaded the alternate CD, created a flash drive image from it, booted the EeePC from it and started installing Ubuntu. The installation from the alternate CD is extremely easy and follows exactly the same path as with the standard CD, with the difference that you don't have the flashy graphical user interface. At the end of the installation, I had a perfectly functional Ubuntu system using the standard desktop. However, what I wanted was the netbook desktop.

From Standard to Netbook Desktop

The Ubuntu netbook desktop looks very different from the standard one but in practice it is just made up of a small number of packages.

Adding the netbook packages is extremely easy. Open a terminal and run the following command:

Once this is done, you will need to ensure the netbook launcher and maximus applications are started automatically. To do this, go to System -> Startup Applications and add two entries with the following commands:

Make sure that both can be started by starting them manually, either in a terminal window or via ALT-F2. Then, disable the desktop to ensure you don't accidentally click on it when you want to start an application:

You then need to customise the Gnome panels.

Right click on the top panel, where the Applications menu is and remove it. Do the same with the Firefox and Help icons. Then right-click again, in an empty area, and select "Add to Panel"; add the Go Home Applet, which will add a small Ubuntu icon. Right click on that icon again, select "Move" and move it all the way to the left.

Right click on an empty area of the top panel and select "Add to Panel"; add the Window Picker Applet and move it to the left so that it is flush left against to Go Home Applet.

Finally, right-click on the bottom panel and select "Delete this Panel". 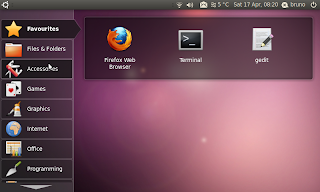 At first, the favourites folder will be empty so you will have to add them yourself.

One final change I made to the installation is that I removed OpenOffice.org and Evolution. The former because it occupies a lot of hard disk space, the latter because it really doesn't work well on so small a screen.

An alternative option to install all the required packages is to install the netbook meta-package:

I didn't try this so I don't know how much it installs and configures for you. One of the nice side effect of doing it the way I did is that it keeps some standard configuration, such as the multiple workspaces that you can access via CTRL+ALT+arrow keys. I find that this works particularly well with the netbook interface.

for the Prepare Disk Space screen (or any screen you cant fully view) just left click on the window and hold down the "alt" key and drag the window around until you can view what you need. this works for me on my eeepc 701.